Vancouver Island is not without many opportunities to get out in nature. This year, we have explored it more with our motorhome, Harvey. We were not long home from my last posting, maybe a couple of weeks when we headed back out. The weather was expected to be nice despite the date on the calendar. We had settled on Little Qualicum Falls again for two or three nights but this time in the lower campground to be nearer the river and potentially hear the water flow. We also felt it is more open down there so would be brighter — this was a consideration this time because of being later in the season. We were to arrive on the Tuesday, but Denis was eager to leave Monday so we made a shorter first day drive to Bamberton for the first night with another couple. Our plan had been to secure a site near the trail down to the beach with maybe even a partial view of the water. That plan was quickly squashed when we arrived to find that the lowest loop was already closed for the season. It was September 28. We did find a double campsite and had a good walk to the beach and back. The days are that much shorter but still a nice time and a lovely campground despite the warnings of “a problem cougar” and “multiple bear sightings.” Neither was seen by us.

The following morning we got back on the road heading north. Another couple friends arrived first to Little Qualicum Falls and we found three sites in the loop along the river with Denis and I securing what we felt was the best site. Such good friends we have to let us have the one on the riverside as they took the one across the road. Once all three of us couples were set up we headed out to hike the full loop of Upper and Lower Falls. Thinking we were set up in such lovely sites — I could even hear the river — I was prepared to pay for two nights and might even stay three. Imagine our surprise when we were told we could only do one night where we were as the lower campground was closing on the 30th. Awww…. we would need to move to the Upper. Lesson learned: read the board when entering, even if you think you know how the system works. Also, maybe read about the park on the website before making plans. No matter, really, in the morning we moved up top and found a double and single with a trail in between and settled on two nights. More hiking and shared dinners and good conversation and campfires meant for a lovely couple of days on this wonderful Island of ours. The weather? Well, it didn’t pan out to be quite as beautiful and warm as we had expected but still very pleasant. Another little jaunt under our belt and we headed home on the Friday morning. One couple made one last night out at Living Forest in Nanaimo, securing one of the last sites available. It seems there might just be something to the fact that snowbirds are filling those RV parks with full service.

Some photos from the lower campground —

Are you new to blogging, and do you want step-by-step guidance on how to publish and grow your blog? Learn more about our new Blogging for Beginners course and get 50% off through December 10th.

WordPress.com is excited to announce our newest offering: a course just for beginning bloggers where you’ll learn everything you need to know about blogging from the most trusted experts in the industry. We have helped millions of blogs get up and running, we know what works, and we want you to to know everything we know. This course provides all the fundamental skills and inspiration you need to get your blog started, an interactive community forum, and content updated annually.

On September 7, 2020 we headed out for a little camping getaway with another couple. Destination: Little Qualicum Falls, a provincial park on Vancouver Island. What a lovely, mostly empty campground. We shared a double campsite with our friends for the senior rate of $22 for two nights.

The next afternoon we were joined by more friends and we had secured a site right across the road for them. We hiked again in the morning before they arrived then went for a walk to the lovely swimming hole and 5 of the 6 of us went it. It was delightful — cool, but so refreshing. Years ago I believe Mom brought my brother and I to LQF to camp and I have always believed it was where I truly started to feel that writing can be inspired by nature, the sounds of the river flowing by in particular.

The day ended with an amazing communal dinner and socially distanced visiting.

Day 3 started with us saying goodbye to dear friends that had joined us for the one night. They eagerly headed home to await special visitors to their home and we continued up island, opting to stop the night at Qualicum Bay Resort on Highway 19A for one night with full service, including wifi, for a chance to catch up. Wifi was not great for me but I did manage connecting some.

Day 4 — We continue moving up the Island, aiming for Elk Falls Provincial Park. Having been here last year in the summer and landing one of the last sites, when we circled and found two sites in close proximity to one another we snagged them. Good thing as the campground did fill up. Senior rate $23 for two nights. Hubby even gets to fish the stream with pinks in evidence.

Day 6: By this point, we are aware there is smoke impacting the Island but we have been sheltered from it. As we start to drive further on Highway 28, heading to Buttle Lake, we become more aware of its presence. Arriving at Buttle Lake just around the time people who are leaving are supposed to vacate we try to secure sites, including one for our friends who will join us later in the day once again for a couple of nights. Karma is with us again and we secure a single site that will be large enough for both Harvey and Sunny (yes, we have named our motorhomes) and right behind us another site comes empty that our travelling companions settle into. Bonus : we are right near the lake access. This campground affords the boys some good fishing opportunities though nothing is caught, nary a bite even, and some wonderful hikes.

You can see, in these photos, our first day, the Saturday, we still have blue skies. By later that day smoke has settled in more and the next day the vistas were not nearly so clear.

Day 8 – After two nights here it is time to move on and we bid Sunny and our friends adieu for now. Our travelling companions move on with us. Having had no cellular at all in Buttle Lake we were seeking a full-service campground/RV park down Island. We settled on Seal Bay RV Park. Originally thinking two nights but I did say weather-dependent. When Denis called to reserve two sites for one/maybe two nights and mentioned the prospect of rain the person said not to worry you won’t see the rain. The suggestion being that the smoke would prevent it. Yes, there was smoke but we did still see the rain. Taking our time heading down we made a stop at Miracle Beach Provincial Park. It was somewhat eerie to look over the beach and not see the horizon.

Once settled in Seal Bay RV Park we contacted friends in Comox who came to visit us at the campground and we all headed out for a hike through Seal Bay Regional Park to see the water. We did have some rain but the forests provided an umbrella for the most part. Upon our return we proceeded to pull together a communal dinner which we enjoyed under the awning as the rain provided the music.

Day 9 – we did leave the Comox Valley area. We would’ve stayed another night had we been able to secure sites at Cape Lazo, closer to the water. Instead, we made our way down Island and around Qualicum actually saw the first of some brightness. We opted for Rathtrevor Provincial Park in one of the newly-formed camp loops in what used to be parking. They have created some lovely sites there and I find them so much brighter. We had a visit from our nearby friends who had joined us for three nights on our little getaway and hiked the beach and relaxed to end our Island getaway.

Until we head out again this is me signing off… 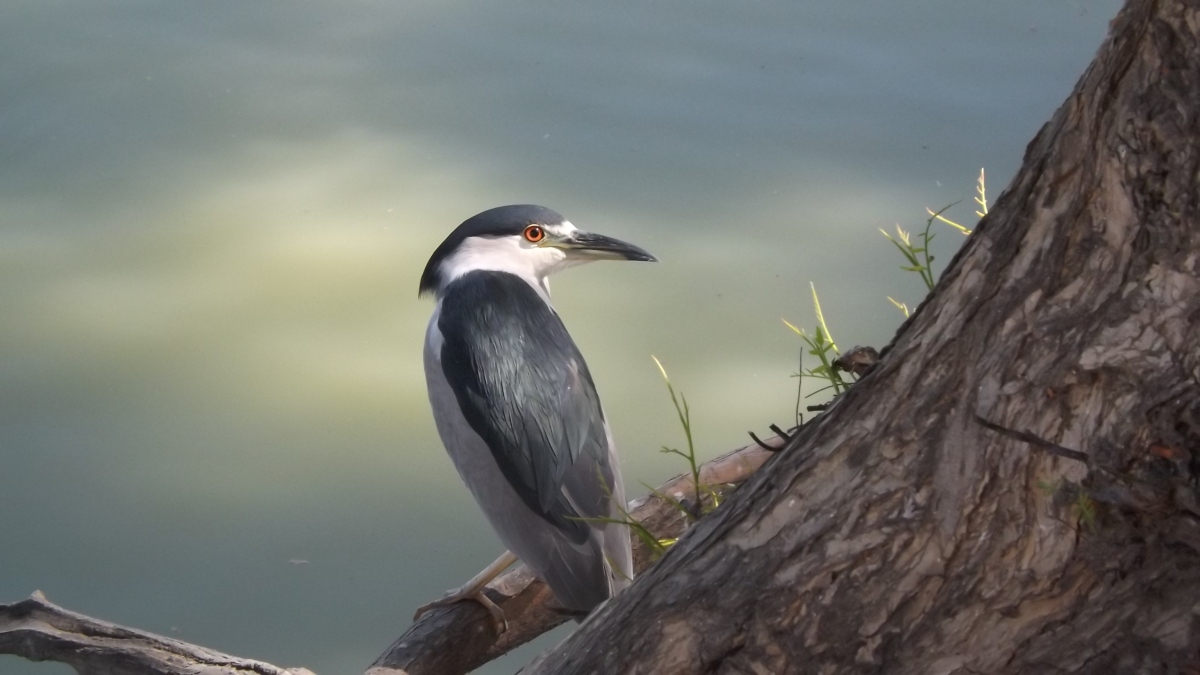 One of our last days of our latest trips was a nature walk around Lindo Lake in Santee.  There were even more birds this walk around the lake.  This lovely bird intrigued me — black crowned night heron.

So, with this last trip in Harvey (our Class C motorhome) the original plans were to go East and capture the last 8 states.

Plans change.  Shortly before the planned date of departure, Denis mentioned he wasn’t so into those original plans.  Some discussion and then a decision to see some of our wonderful Vancouver, new and familiar places, before heading the USA and ultimately a visit with family in El Cajon, California with a couple desired stops en route and on the way home.

Decision made … we left home on August 21, heading north.  Of course, I had planned and wanted to blog daily …. once again, plans change.  A lack of connectivity personally combined with the fact hubby often posted instantaneously photos and an update of our travels seemed to lead me to not do so…. I did, of course, make notes and tracked details.  I will admit this felt different and I still feel something is missing.   I am going to try to create one post-return to provide my overview of this trip.

Spent quality time with dear friend in Port Hardy and got some sun (those of you in the know realize this can be something of a rarity up there) to afford us a couple of walks.

Is today the day I start??  I have done some thinking, a bit of reading, and I think it is — I think I can….

I have always written, least that is how it feels… entries in diaries, letters to penpals and family and friends, journals/blogs of our travels, notes to myself and even more has only been written on the pages in my mind, never set to paper nor computer… perhaps this blog will change that